Where can I see manta rays in Maldives? 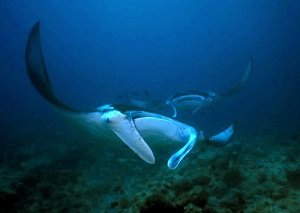 
Almost everyone who comes to this island nation has heard that "there are Mantas in Maldives". Snorkeling or diving with them is usually high up on travelers' bucket lists. So nothing could be more disheartening than arriving to a resort only to hear that "it's not manta season right now". How come? - you might ask. Aren't there always mantas here?
The answer is yes. Manta rays are always around, but they move and migrate with the seasons. So if a manta sighting is important to you, make sure you match your resort selection with the mantas' likely whereabouts during your travel dates.
To know where mantas might be at any given time, we need to know a few things about the seasons and ocean currents of the Indian Ocean.

In Maldives there are only two seasons - actually called "monsoons" rather than seasons. The southwest or Hulhangu monsoon (commonly and somewhat misleadingly known as "the rainy season"), runs roughly from May to October. The northeast or Iruvai monsoon (you might have heard of it is as "the dry season") runs generally from December to March. April and November are transition periods between the two monsoons.

During the southwest monsoon, the prevailing ocean currents in this area flow from west to east. When these currents reach the Maldivian archipelago, there is a strong up-welling as clear, nutrient rich water is forced up from the 2000+ meter deep Indian ocean floor into and through the shallow atolls. As this water flows through the atolls from west to east, it boost and increases the productivity of the food chain, so by the time it reaches the east side of the atolls, it is a veritable zooplankton soup. And guess what: mantas feed on zooplankton!
So during this time, they will migrate to the eastern sides of the atolls, where divers and snorkelers will be delighted by their presence at cleaning and feeding stations.

During the northeast monsoon, the currents reverse themselves. They will now flow from east to west, meaning that the ease side of the atolls will now have better visibility (because of the incoming ocean current) but less zooplankton, hence no mantas. The mantas will more likely be - you guessed it! - hanging around the west edges of the atolls.

So, in summary: from May to October, it's more likely to see mantas on the east edges of the atolls. From December to March, on the western edges of the atolls. Of course the season might change earlier or later any given year, and as with anything in nature there is never any guarantee for encounters, but if you follow this simple rule of thumb, you will increase your chances greatly!

SUB AQUA DiveCenter on Angaga Island is located close to the western edge of the South Ari atoll, so the best time for mantas here is December to March. One of the top manta points of the whole atoll is just a short dhoni ride away. Check out the photos and videos from last manta season on SUB AQUA DiveCenter’s Facebook page.

SUB AQUA DiveCenter Thulhagiri is close to the eastern edge of the North Male atoll. The best time for mantas here is May to October, but sometimes mantas stay even until early December. There are several great manta points less than 30 minutes away!