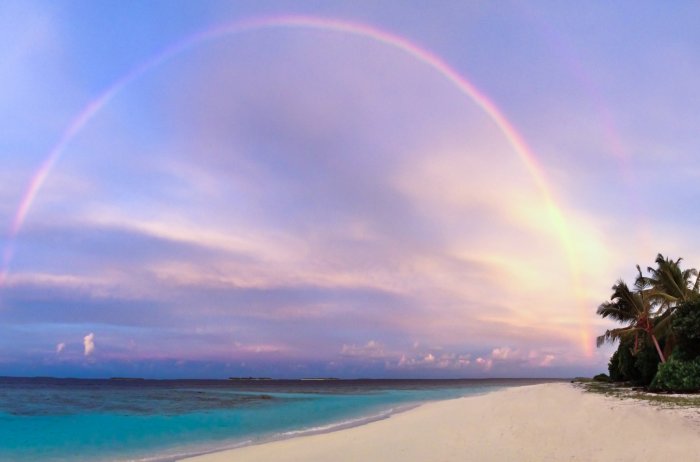 
In the Maldives the year is divided into two main seasons, also called monsoons.
Monsoons are dictated by the direction the wind is blowing from. The word monsoon is actually a bit misleading because to many people monsoon always means rain and storms, and this is not the case in the Maldives.

The Maldives therefore has 2 main monsoons: the Iruvai monsoon and the Hulhangu monsoon.

During the Iruvai Monsoon, the winds come from the northeast; basically from the direction of the Indian subcontinent. This wind is generally dry and settled, as it passes over a large and dry land area. The Iruvai is said to start around mid-December and runs for approximately 4 months until mid-April.

From mid-April the wind changes and starts to come more often from the southwest, picking up a lot of moisture as it moves over the Indian Ocean. Interestingly, this monsoon actually begins in India; as the air warms up over the Indian sub-continent (during the North-hemisphere summer), the air mass rises sharply and there is a rush of wind to replace it. The wind is coming from the southwest (moisture-laden ocean) and so it brings rain with it.

Winds in the Maldives are generally at their strongest in May and the rain starts to fall. This is why the Hulhangu monsoon is known as the wet or rainy season. This monsoon runs for approximately 6 months.

The answer is that you must take into account the changeover period between the 2 monsoons. This is usually around May and November. The wind can change direction frequently during these times. Weather patterns can change and shift slightly from year to year, but in general this is how it runs. Annual Iruvai and Hulhangu monsoons with a less determinable period in between each one.

The weather patterns described here are just that: general patterns shown over the long term.
In reality, every year is slightly different. The monsoon might change sooner than expected, or later than usual, or it may be wetter or drier than usual. Being 100% sure of the dates for Maldives seasons and monsoons is impossible due to larger weather systems at play such as in the Bay of Bengal, which can affect the Maldives.
Maldives is generally considered out of the cyclone belt but there can be storms from time to time that carry cyclones damaging the islands. This can in turn mean forced evacuations of the islands as they tend to erode away with persistent pounding of waves in an abnormal direction.

The Maldivian people have learned to deal with such occasions. They plan their lives around the calendar of Nakaiy, a series of 13/14 day intervals each with a more or less predictable weather pattern. (Download the complete calendar of Nakaiy as used by Maldivians to predict the weather).

What about rain?
Yes, it can rain VERY hard and unexpectedly at ANY time of year. February can be a month of sudden squalls but mostly the rain is falling during the changeover period between monsoons, so April and November.

Where to stay and where to dive during the Maldives monsoons?
Diving in Maldives is year-round. It depends on where your Resort is located as to how the monsoons will affect your diving holiday.
Thulhagiri Resort for example is in North Male Atoll but close to the eastern edge. This location will be affected by water conditions throughout the year.

Northeast monsoon
If the winds are coming from the northeast (during the typical northern hemisphere 'winter'), Thulhagiri's east side will be more exposed to the strong winds and big waves. Currents will also be coming more from the east side, which affects both snorkeling around the island, and diving.

Currents can be strong during this period so care must be taken even while snorkeling around Thulhagiri island to avoid being pushed away from the reef. If you are not a confident swimmer/snorkeler, it is recommended that you remain on the west side of the island where the island itself will protect you from the strong currents from the east.

Diving the eastern side of the atoll during the northeast monsoon will mean predominantly incoming currents. This means the water is rising from the deep ocean and flowing into the shallow atoll.

Diving the outer reefs on the east side of the atoll will be spectacular during this season, as you have generally better visibility (up to 50m on a calm, sunny day), and a good chance of seeing big pelagics (tunas, sharks, jacks…). But it will also mean strong incoming currents and possibly very big ocean swells on the outside of the atoll, so even drift dives can be challenging. If the wind is too strong, the big ocean swells might prevent venturing further to the outer reefs. The current will still be incoming inside the atoll, though somewhat calmer. Some dive sites, especially the smaller “thilas”, will not be diveable because of the too strong incoming current.

Dive sites on the western side of “farus” or islands will be calmer, with less current, but also with poorer visibility and less fish. All this said, currents and swells allowing, there can be some very spectacular and very thrilling dives during this season.

Southwest monsoon
If the prevailing wind is coming from the southwest (May to November), the waves will not be so big by the time they get to Thulhagiri Island. The western side of the island will have more wind and more waves than the eastern side. If you don’t like the wind, it may pay to try to get a room on the eastern side of the island during this time… but then you give up the nice sunset view.
Storms are not that common, but it does rain quite often. You might get lucky and get two weeks of sunshine, with rain maybe just a few times at night. But you might also get two weeks of stronger wind and generally cloudy weather, with some rain almost every day.
As for diving, dive sites inside the atoll and the outer reefs on the east side will have varying degrees and directions of current, as well as varying degrees of visibility. Currents can change two three times during the day, and visibility can also change from one day to the next.